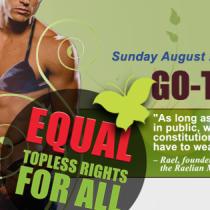 Back
Tweet
“Around the world, gender topless discrimination still abounds,” said Nadine Gary, president of GoTopless, a women’s organization fighting for equal topless rights on the basis of gender equality.

She said the organization will hold topless civil rights demonstrations worldwide on August 25, marking the sixth straight year it has done so.

“We’ll be seen in greater numbers this year, with events in close to 40 cities around the world,” Gary said. “Women must have the same legal right to go without a top that men do!”

She said Gotopless was launched by international spiritual leader Rael in 2007 after topless activist Phoenix Feeley won a lawsuit against New York City and was awarded $29,000 in damages.

She pointed out that in Montreal just a few weeks ago, police officers ordered Rebecca Ann Clark to put her top back on at a Quebec Beach but not her boyfriend.

And during this summer’s heat wave in Europe, police reminded Parisians and visitors that it’s illegal for women to go topless in city parks or at Paris-Plage on the bank of the Seine,” Gary said. And in Britain, Scotland Yard issued a statement that women going topless would be tolerated in public ‘unless someone complains.’ Which of course could be any time. Even in Auckland, New Zealand, where it’s already legal for women to go topless, the organizers of “Boobs on Bike” were taken to court in an attempt to stop their annual Bikers’ Topless Parade. In all these places, men can bare their torsos without a thought.”

"Indecency cannot, under any circumstances, override topless gender equality laws! Women's legs were once deemed indecent in public, so was women voting! But gender equality has always had the word." Gary added.

What could spur change?

“We need an influential woman to exercise her topless right in public!" Gary exclaimed. “Lady Gaga will be in Brooklyn for the Video Music Awards on GoTopless Day. If she were to go topless there, it would empower other women to ‘free their breasts and free their minds,’ as our GoTopless motto says.”

For participating cities and events, see the “Boob Map” at: [link]