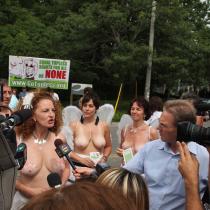 She said the organization will hold topless civil rights demonstrations worldwide on August 25, marking the sixth straight year it has done so.

Gary pointed out that in Montreal just a few weeks ago, police officers ordered Rebecca Anne Clark to put her top back at a Quebec Beach but not her boyfriend. «No woman should suffer such humiliation simply for sunbathing or walking in a park bare chested when men are allowed to». GoTopless will support Rebecca Anne Clark with a demonstration in Montreal.

GoTopless notices this sort of contradictory ruling in Ontario and in other provinces where women have topless rights. Words like “proper attire” or “disturbing the peace” are commonly used to effectively annul their topless rights. «This has now changed in Toronto and this gives us an opportunity to celebrate with art, music and dance» explained Sylvie Chabot, head of Gotopless-Canada.

In Vancouver toplessness is legal for both sexes. A demonstration will be organised to give the opportunity for women to experience the many liberating feelings of being topless in public and being legally free to do so. «When women free their breasts they empower other women to do the same», added Chabot.

GoTopless was launched by international spiritual leader Rael in 2007 after topless activist Phoenix Feeley won a lawsuit against New York City and inspired women all over the world to do the same.

Vancouver: 1pm - Walk on Robson from Denman to Hornby