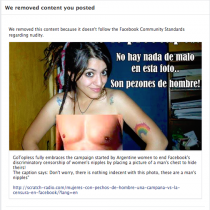 Back
Tweet
LAS VEGAS, May 25 – In a statement released today, Gotopless, a U.S.-based organization founded in 2007 by spiritual leader Rael, announced that women have the same constitutional right men have to go bare-chested in public, and that social media companies such as Facebook act unconstitutionally when they deny women the right to post topless pictures.

“Just as men fought a century ago for the right to go bare-chested in public, we have to fight now to change the puritan values that make people go wild when they see, or even think they see, a woman’s nipple,” said Gotopless Spokesperson Rachel Jessee.

Jessee pointed out that although Gotopless includes both women and men among its members and supporters, the general public “still has a long way to go.”

“International companies like Facebook have a responsibility to lead the way toward change, but they’re doing the exact opposite instead,” she said. “I’m dumbfounded by Facebook’s hypocritical and discriminatory policy of removing any image from our Gotopless Facebook page that contains a nipple. The censors probably didn’t even realize we were showing male nipples! In one picture we posted, a male breast montage covered a woman’s breast, and the caption said, “Why is it OK to show his breast but not mine?” Facebook removed the photo, even though pictures of bare-chested men are allowed. But since the face shown was a woman’s, they assumed the breast shown was hers too.”

All of which proves Gotopless’s claim that Facebook is acting unconstitutionally, according to Jessee

“Some women have flat breasts and some men have large ones, and they all have nipples,” she continued. “The difference lies only in the minds of those who either have sexual fantasies when they see a woman’s breast or take offense. Showing an ankle was once deemed shocking in the West, just as it is today in the Middle East. “Our great-grandmothers fought for the right to show some bare skin. Now it’s time to free our nipples along with our ankles.”

Gotopless is currently rallying supporters, including on its Facebook page, and plans to climax its campaign on Gotopless Day, August 24, with GoTopless Pride Parades in locations across the United States and worldwide.

“We hope thousands of women will turn out for that, Jessee said.