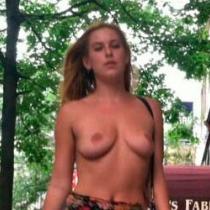 “We’re inviting Demi Moore’s daughter, Scout Willis, to New York City’s first GoTopless Pride Parade,” said Rachel Jessee, GoTopless spokesperson and leader of GoTopless NYC. “By walking topless in New York City this past week, she showed that a woman’s breasts are nothing to be ashamed of, and that the sight of a woman’s body is natural, noble and dignifying. In our events this year, we especially want to convey a sense of pride in female top-lessness. We want all the shame and guilt to fade away.”

“It’s a matter of gender equality,” Jessee explained. “Men earned the right to go topless 82 years ago and it’s time for women to have that same right! But note that we’re a feminine organization, not a feminist one. We won’t act manly to earn our rights. Femininity anchored in determination will win our cause.”

She pointed out that women earned the right to vote based on gender equality.

“That’s why GoTopless Day Pride falls on or near Aug 26, Women’s Equality Day,” Jessee said. “We’re demanding gender equality for topless rights. As international spiritual leader Rael, who founded GoTopless in 2007, puts it, ‘As long as men are allowed to go topless in public, either women should have the same constitutional right or men should also have to wear something that hides their chests.’”

“New York has been legally topless for women since 1992, but Los Angeles still bans it,”
Jessee said.

GoTopless’s 7-year campaign has even led to the making of a movie, “Free the Nipple,” directed by Lina Esco.

“It will be released soon,” Jessee said.