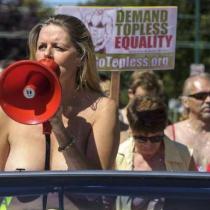 Back
Tweet
Montreal, August 20, 2014 – GoTopless, an international organization of women who campaign in favor of women’s equal rights to be topless in public wherever men have this right, will celebrate its 7th year anniversary on August 24, 2014.

GoTopless spokesperson, Sylvie Chabot, explained: "In Montreal, this year's event will be held on Sunday, August 24 at 1pm, by the Georges Étienne Cartier monument. It is interesting to note that engraved on this monument one can read, ‘Canada must be a country of freedom and all freedoms must be protected by the Law,’ Cartier, 1867. Nearly 150 years have passed and it is time for this quote to materialize."

GoTopless is inviting Montreal residents to participate in this event which they point out will increase pressure on the government to amend current laws. In Vancouver, a GoTopless walk will take place on Robson street starting at 1pm.

When asked why Chabot feels the need for laws to change she said "Because the Constitution guarantees equal rights for women as it does men yet there are laws in place which are going against the Constitution! Furthermore, by now it should be clear to everyone, especially women, that the conservative and regressive policies of Stephen Harper’s government have not improved women’s situations in Canada. To name just a few examples, the termination of the federal childcare program, the huge reduction of the budget allocated to the Feminine Condition, the cancellation of the Court Challenges Program which was specifically designed to facilitate aid for those addressing matters of constitutional equality, etc."

Raelian women believe that Mr. Justin Trudeau and Mr. Thomas Mulcair would make far better advocates for women's rights in Canada and have filed a formal request for support to their offices in Montreal to ensure that women have the same rights as men.

Chabot continued, "In this case it means that women can exercise their constitutional right to move about wherever they please in public with their breasts exposed if they so wish," August 26 will be Women’s Equality Day and will be held in several cities around the world. Our campaign is part of a broader movement to end all forms of discrimination and repression against women."

Many have praised the women like Romana Santorelli, Phoenix Feeley and Gwen Jacob who have vigorously defended this right through their individual action and who have even been successful in having laws amended in Ontario. Raelians are not the only ones who praise these women but say that these women are role models for all other Canadian provinces and, thanks to their courage, politicians should be inspired to change the laws and make them more equitable and unbiased.

Chabot concluded by saying "It is in the name of freedom and Constitutional Rights that men and women of different faiths, sexual orientations and associations will mobilize on August 24th so that never again will women be humiliated or prohibited from sunbathing topless wherever men can, or be reprimanded when breastfeeding in public. We invite Mr. Trudeau and Mr. Mulcair to speak out on women’s right to be bare-breasted wherever men are given this right. We also invite all those who believe in equality for women and men to come out and join us in this cause on August 24."