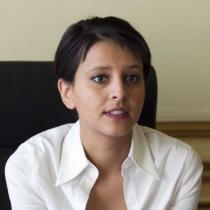 As Minister of Women's Rights, you crafted the bill on equality between women/men that just passed this past August 4. Your goal was to establish real equality between the two genders. This reason is why I felt compelled to write you this letter.

My name is Maryline Canin and I am France’s representative for the activist and non-violent organization, "GoTopless."

Gotopless, an independent non-profit organization based in the United States, was established in 2007 under the guidance of spiritual leader, Rael, in order to promote gender equality. It is based on a simple premise: Wherever men are granted the right to be shirtless, women should have the same right to be topless, in the name of equality among all human beings. The Topless protests and demonstrations organized on International GoTopless Day that have taken place over the years have quickly gained a lot of support and, today, the event draws thousands of people each year on the Sunday closest to August 26. In fact, this year we will celebrate the 7th year anniversary of the event and "GoTopless Pride" parades are organized in over 60 cities worldwide.

GoTopless seeks to eliminate the double standard that currently exists everywhere around the world. For instance, our very first protest was in Paris in 2011 and on that day something very unexpected happened. Only women from our organization were arrested and taken to the police station even though they still had their clothes on. They were held at the police station for two long hours and after being released, the police continued to harass them and prevented them from joining the march. Men, on the other hand, were able to freely enjoy the event in their red bras as a show of support for our cause.

We wrote to you at the time to ask for advice and support. For your information, a complaint has been filed since then for wrongful arrest and discrimination. The investigation is underway.

Gotopless activists don’t show their bare breasts as a sexual act or in order to attract attention. Rather, it is a political demand for the liberation of women. A woman showing her breasts should be natural and part of life. It should be a non-event.

I would add that the right to be topless gives women a commanding sense of empowerment after centuries of subjection to Puritan Judeo Christian values and macho laws. Such constraints weaken women’s self-esteem and how they view their bodies.

Your concern to make France less sexist and less violent toward women touches us and we would like to support your work by suggesting that you take a fresh look at this path of sexual equality that calls for toplessness for all.

The "topless" theme about equality between women/men is everything but trivial: it is one of the most sensitive themes because it triggers a reaction in people’s consciences, religions and governments.

This change is unavoidable. We need only look at fashion shows that highlight women's breasts, or at women who protest topless to seek gender equality around the world (I’m thinking about China!), or at women who travel around the world topless and post photos of their bare back on social networks to elude censorship (see attached photos).
And for those who fear that such an event might be an opportunity for men to show up in large groups, rest reassured. Less than one hundred years ago, when men were allowed to go shirtless in public did women rush to see them? Not so. Then why should we assume that men would not be equally reasonable?

And even if there was an influx of men, all we need to do is remind ourselves of how Israeli Prime Minister, Golda Meir, reacted after a wave of rape incidents stormed her country. While the popular demand was to impose a curfew on women, her response was: "This is a problem that involves men, therefore, men are the ones who should be locked up."

Children will not be shocked by it either no matter what people say. Aren’t breasts one of the first things they see, touch and suck in their lives: their mother’s breast? To imagine sexual ideas in the minds of children at the sight of a breast, is this not the result of adults’ brains projecting their own fantasies?

This year, our national event will be held in Lyon, on Sunday, Aug. 24 at 2pm at Bellecourt PLace. In addition to requesting a right, we have added a festive and awareness-raising feature by launching a “GoTopless Pride” parade celebrating the Pride of being a Woman and Pride of our nude breasts, just like the Gay Pride. If you recall, this Gay Pride March was made possible thanks to the relentless efforts of a minority that wanted to defend homosexuals’ rights. It would be my pleasure to welcome you if you were to decide to attend the event in your beautiful city.

I hope my letter will touch a feminine and activist fiber in you, the one about just causes. I would be happy to discuss with you the fruits of our mutual thoughts, those of your research, and of our seven years of experience. I am available to arrange an appointment in a timely manner.