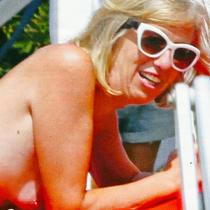 Back
Tweet
VERONA, Sept 1 - "I warmly congratulate Italy's Minister of Education, Stefania Giannini for her recent public topless appearance on an Italian beach”, said Monica Morghen, Italian leader of GoTopless, a women's organization that claims women's equal right to go bare-chested in public wherever men have that right.
The minister of Education taught everyone a lesson with the candor in which she reacted to the paparazzi photographing her exposed chest. She reacted naturally as a topless man would have, unworried about the consequences her going topless in public would have on her political career as head of the Ministry of Education.

"To her, going topless was obviously a non-event, and that is exactly what GoTopless is looking to achieve not only on the beach but everywhere in Italy." Monica Morghen said.

She added: “our women's organization inspired by Rael, spiritual leader of the Raelian Movement, has the goal of promoting true equality between men and women.”

“Though it is legal for women to be topless on public beaches in Italy, we are still far from seeing
topless gender equality fully applied in our country”, Morghen explained.

“In public pools and parks, or on the streets while jogging, men are allowed to show their bare chest while women would be convicted of indecent exposure for the same act. How can the female breasts be considered indecent when it is par excellence the symbol of beauty, life and nourishment in all the art museums of our nation?

The Italian mentality proves once again to be negatively influenced by catholic morals causing blunt discrimination in the Italian legislature.

In the 21st century, Italians need not be the victims of such archaic values that instil nothing but
taboos, fears and guilt among people.

Some may regard standing for topless equality as trivial but it is far from the truth. Demanding gender equality at all levels is fundamental to the dignity of all citizens. Treating everyone with absolute parity is the way to non-violence.

Additionally, when we strip off all that separates us from our environment, we are totally true and we can better perceive our oneness with everything, feeling no separation with the living beings sharing the planet. And then, we naturally develop a peaceful and non-violent attitude”, Morghen added. “For this reason, I consider the practice of going topless not only a socially revolutionary act, but also a deeply spiritual one, capable of strengthening the peace in the world.”