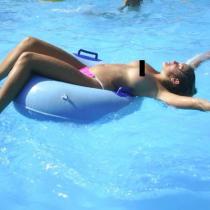 The following story shows you how a well established State policy that garantees equal topless rights like in the case of Ontario, Canada can insidiously be violated by a city whose government caves in under the pressure of a few unbalanced, repressed citizens who have difficulty dealing with a bare female chest in public.

The pathology of these maladapted individuals is to constantly perceive the human body as sexual including the body of children! It is horrifying to see that the topless laws of our society are based on the psychologically challenged views of a minority which contaminates the rest of our community with shame and guilt... or worse.  While we must be considerate of their psychological handicap and must patiently help them overcome it,  they mustn't be allowed to decide on policies concerning women's topless rights! Endorsing policies that suit their impaired point of view will only aggravate their repressed condition and possibly cause healthy minds to suffer from the same unfortunate unbalances. As an analogy, imagine the tragic consequences if we had let racist individuals rule on segregation in the 1960's!

Thankfully, our society has an impartial safeguard to our human shortfalls: our Constitution which must always have the last word in all circumstances including equal gender topless rights.

The city of Guelph, famous for its Gwen Jacob court case in the early 1990's that made going topless legal, has duly "revisited" the well established equal gender topless policy and ban women from the age of 4 and up from exposing their chest at public swimming pools.

The incident that sparked the controversy occured on Saturday when a a lifeguard told a Fergus family their eight-year-old daughter Marlee had to cover up while in the Exhibition Park pool. Her brothers were allowed to continue swimming in just their shorts.

Marlee's mother, Anika Warmington strongly disagrees with the lifeguard's request, explaining that it was terribly wrong and extremely inappropriate because it sexualized the chest of her 8 year old daughter. She wondered if he realized the message he will actually sending by saying that.
City Councillors, Mark MacKinnon, Phil Allt and Dan Gibson shared the mother's opinion.  Mackinnon stated that "There's no reason why someone standing on one side of the fence at that public pool can be topless but on the other side can't. That's not a good rule, it doesn't make sense.

The Ward 6 councillor said the entire community should not bend to accommodate a minority who might be offended and went on saying "Otherwise there are some people that might not like seeing women's ankles and we don't want to go back to that".

It is to be noted that all women, regardless of age, are legally allowed to go topless in the province, following a 1996 Ontario Court of Appeal ruling.  The ruling overturned the indecency conviction of Gwen Jacob, a University of Guelph student who was arrested by Guelph police in 1991 for walking topless.

On the other hand,  Kristene Scott, general manager of the Guelph Parks and Recreation department, said that she was satisfied the policy implemented by the lifeguard. "Although it's legal for anyone to be topless in the public realm, when participating in city recreation programs or using supervised or enclosed recreational facilities, we require them to wear bathing tops," she said.

"For the protection of all participants and staff, females ages four and older must wear a bathing top in City of Guelph enclosed or fenced pools," the policy states.

Ward 1 Coun. Gibson said he would like to "hear the dialogue out."  "When I hear the term 'sexualizing our kids' I struggle just because I'm not sure that was the intent of the rule," he said.  "But to revisit and to make sure it's still accommodating for everyone, absolutely, there's no harm in it.  "Let kids be kids, that's my position," he added.

Mayor Cam Guthrie wrote in an email that he committed to the girl's mother on Twitter that he would look into it with staff and is still working on that.

Catherine Carstairs, a gender history expert and associate professor at the University of Guelph, finds the policy "unfortunate.  "It's certainly indicative of the degree to which we sexualize women's chests and then put that back on children," she said.

Paul Rapoport, co-ordinator with the Topfree Equal Rights Association, said he doubts that the city's policy is even constitutional, given that it contradicts the Gwen Jacob appeal court ruling.

"Women have the right to be without tops at any age, just about anywhere in public," he said. "If they're trying to satisfy everybody and not offend anyone then everybody had best dress the way they did in 1900 to swim."