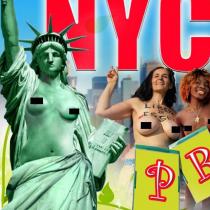 “But few women exercise their topless rights in New York even now,” Jessee said. “Shame and guilt are deeply ingrained, and they find it hard to break free. The purpose of the Nipple Pride Parade is to empower them to overcome those feelings. Decades ago, bare-chested men were arrested for indecent exposure, and many were self-conscious about going topless after it became legal. But men overcame their reluctance and women can too!”

Gotopless denounces the idea that women's breasts should be hidden because they are sexualized.

“What a primitive concept, full of Judeo-Christian guilt,” said Maitreya Rael, spiritual leader of the Raelian Movement, who launched GoTopless in 2007. “I look at women’s breasts in a ‘sexualized’ way and never fight that natural, beautiful reaction! I’m very happy if women look at my nipples or ass - and they do – in a ‘sexualized’ way. We’re all sexual and that’s beautiful! Enjoy it! ”He emphasized that although it’s natural for the sight of breasts to generate sexual excitement, “it doesn’t give men permission to sexually assault or rape women." It doesn't give them the right to order us to cover up either." added Jessee

Women wishing to go topless often worry about police harassment, wrongful arrest or even being confined to a mental institution.

“That’s occurred several times in New York over the last 10 years,” she said. “The Nipple Pride Parade is the perfect venue to educate the NYPD about existing topless laws. Their duty is to protect top-free women elsewhere in public, just as they will during this parade.”

She invites everyone to participate on Sunday:

“It’s liberating and empowering to free the body from repression. Freeing nipples frees minds, restoring self-image and self-esteem. Our parades overflow with joy and fun. We’ll have breast-decorated floats and carnival costumes, topless acrobats and other performers.Sunday’s parade will begin at 12:30 PM and end at Bryant Park with more performances and a speech about the ERA and GoTopless.”