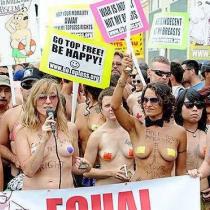 VENICE BEACH - Aug 20 - On Aug. 23, for the 8th consecutive year, the women’s rights organization GoTopless will hold a GoTopless Day Pride Parade on the Venice Boardwalk to demand gender equality for going bare-chested on the beach.

Her organization’s mission is to see that local policies concerning public attire, whether on the beach or elsewhere, adhere to the equal rights provisions of the U.S. Constitution.

“Maitreya Rael, the spiritual leader of the Raelian Movement who inspired the creation of GoTopless in 2007, makes it clear,” Terstenjak said. “He says, ‘As long as men are allowed to go topless in public, women should either have the same constitutional right or men should also have to wear something to hide their chests.”

The Venice Neighborhood Council adopted a Topless Equality Proposal earlier this year, but it has yet to go into effect.

“The Los Angeles County Board of Supervisors squelched it by saying a housing proposal for the homeless had priority,” Terstenjak said. "But reestablishing topless gender equality requires no budget, just a reversal of unconstitutional policy.”

She pointed out that although the city and county of Los Angeles are violating California’s existing topless statute, New York City and New York State have honored equal topless rights for 20 years.

“It’s a striking, shameful contrast,” she declared. “California jurisdictions pass discriminatory topless laws with impunity. When women’s topless rights are violated, the only acceptable alternative to revert back to 1930’s statutes that made bare male chests indecent along with women’s.”

Men taking part in Sunday’s parade will be asked to cover their nipples, since female participants must do so to comply with the law.

“Equality means all or none!” Terstenjak explained.

The parade, produced by PhenoVibe’s Cosmic Carnival, will feature topless acrobats, stilt walkers and performers. It will begin at Navy St./Boardwalk and conclude on Windward Circle with speeches about topless equality. A pre-rally party extravaganza, also produced by Cosmic Carnival, will precede the parade on Fri., Aug 21, in West Los Angeles. That event will include a showing of the movie “Free the Nipple.”