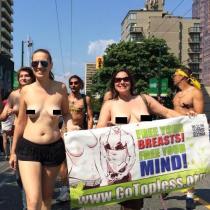 Montreal, August 22 – For the 8th consecutive year, the international organization GoTopless is claiming equality for women to be topless anywhere that is permitted for men, and will be out in the streets of Canadian cities – and elsewhere – Sunday August 23rd.

Sylvie Chabot, Raelian Guide and the Gotopless representative for Canada explained: "While some gains in many places in Canada now allow women to exercise this right, few citizens are educated and sometimes even representatives of the law." She added: "Just remember one event that occurred a few weeks ago in Kitchener, Ontario where Tameera, Alysha and Nadia Mohamed sisters were bothered by a police officer of this city for biking shirtless while it is legal in Ontario since 1991." A great mobilization, to which Gotopless participated, had also been organized in Waterloo on August 1st to denounce this deplorable situation.

Gotopless emphasizes that in addition to Ontario, this right is has been legally recognized in Saskatchewan since 1997 and in British Columbia since 2000. It is time that the other provinces follow suit. Gotopless also reminds that the Raelian women, part of the GoTopless group, filed a formal request in August 2014 for support at the offices of Justin Trudeau and Tom Mulclair, requiring that women benefit from the same rights as men. The organization mentioned that these requests remained unanswered.

Sylvie Chabot concluded: "We hope that these two potential Prime Minister of Canada will dare o rule on this women fundamental right in this pre-election period! In the name of freedom and constitutional rights, men and women of different beliefs, sexual orientations and associations will mobilize as long as women are harassed, humiliated or banned from sunbathing topless where men are allowed to, nor to be disturbed when breastfeeding a baby in public."

Gotopless invites all Canadians to join one or the other following actions at 1PM:

Vancouver (BC) : March and demonstration on Robson

Penticton (BC) : Demonstration and March starting at the City Hall

Toronto (ON) : Topless bike ride along Lakeshore from Windemere to Coronation Park

Montreal (QC) : Celebration at the Mont-Royal tam-tams on Park Avenue, near the Georges Etienne Cartier monument