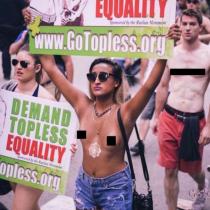 On Tuesday Oct 21, 15, in Fort Collins, CO, a six-member city council made the decision to strike down women's constitutional right to go topless in their town because they were unable to see beyond their guilt ridden Judeo-Christian upbringing and therefore violated the Colorado and US Constitutions.

Contrary to the council's findings, women's right to go topless in public is strictly a matter of gender equality and has nothing to do with "decency" and "modesty" as they led the public to believe.  Topless rights may have been linked to decency prior to the 1930's but when men were unilaterally given the right to go topless in public in 1936, the matter suddenly became a constitutional issue violating gender equality.

Instead of focusing on resolving a gender discrimination matter, the city council preferred to echo the opinions of the members of its community equally tainted with Judeo-Christian guilt.   For example, resident Rachel Dozier came to the council meeting to testify that she would reconsider staying in Fort Collins to raise a family if topless equality passed because she holds the sight of breasts to be harmful to children.

Councilman Ray Martinez made a similarly constitutionally unfit remark when he said: " we will not allow Fort Collins to turn into a strip club". Note a comparably baseless 1935 comment from the Atlantic City Fathers who warned men challenging topless decency laws 80 years ago,  "we will not have gorillas on our beaches!".

What's most deplorable and reprehensible is the conclusion of Mayor Wade Troxell when he said that the council's ruling overwhelmingly reflected the sentiment of their community.  Should the city council have turned to a majority of guilt-ridden constituents for constitutional advice on gender equality especially when the body of a woman is at stake?

Even Kristin Stephens, the only woman on the city council, failed to see the gender discrimination at stake and advised topless rights activists to stop wasting their energy on such worthless cause and instead to take on more worthy ones like fight for more women representation in the political arena.

Ms Stephens and other women's magazines like Marie-Claire UK who made a similar statement after GoTopless Day on Women's Equality Day two months ago need to understand that women's empowerment comes from every aspects of gender equality. It is not limited to the issues that their narrow, politically correct minds find “suitable” for a woman.   And to be clear, such noble issues range from equal pay to equal topless rights and everything in between.

Instead of shaming women for their body and sexuality century after century let us empower them in every aspect of their lives and let them thrive in the political arena with complete pride and dignity.  A fully empowered feminine, caring voice is in dire need in the decision-making of this planet.

Yes, a women's bosom can be sexy, and so what? Our Western societies have no laws against men or women being sexy in public. Fort Collins sees countless women with sexy shorts and no one gathers at the city council meeting to testify in horror!

Treating a woman's torso differently than a man's is exactly how we perpetrate the objectification of women. That is why both the Colorado and US constitution advocate gender equality without restrictions.  Our forefathers knew that an unfair society is an unfit society.