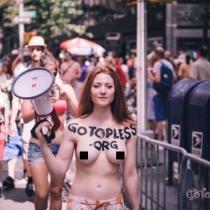 LAS VEGAS, Jan. 8 – GoTopless, the organization that launched the Equal Topless Rights Movement, celebrates its 10th anniversary in 2017. Its court case, Tagami vs. the City of Chicago, is also slated to be heard by the U.S. Supreme Court this year.

“Melania Trump had an uninhibited European upbringing regarding nudity,

so we’re asking her to promote topless equality and empower others to demand this fundamental constitutional right,” Gary said. “Equal topless rights would heal the body guilt and shame women have endured for centuries and free men from obsessive behavior over breasts, which comes from discriminatory topless laws.”

“We hope the Supreme Court will reverse this decades-old gender discrimination (men have been able to go topless since 1936) by upholding the 14th Amendment that grants equal rights. Gender equality must prevail, either by granting women equal topless rights or by eliminating the men’s. Separate gender rights is unconstitutional.”

Gary said GoTopless is prodding society to give women the same rights men have, especially in the taboo area of topless equality.

“Topless equality is a blow to male dominance since controlling women’s bodies has always been a key part of that dominance,” Gary said. “Rael emphasizes that when women are fully empowered, their caring nature as life bearers can heal the unspeakable mess created in a world ruled exclusively by testosterone. Equal gender topless rights will empower today’s women as much as equal gender voting rights empowered 20th century women.”