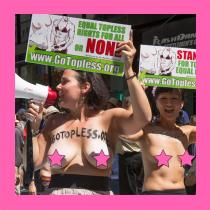 LAS VEGAS, Aug. 9 – On Aug 26, the organization GoTopless will celebrate its 10th anniversary of fighting for constitutional topless equality. Its activism has sparked significant court cases.

“We pose the politically incorrect question: Is gender equality applicable to women's nipples in 21st Century society or or will Judeo-Christian values dictate legislation concerning women's bodies? said Nadine Gary, GoTopless President and Raelian Priestess “The right to go topless was granted to men 80 years ago.

She said a key topless equality case is now before the courts: Tagami vs the city of Chicago.

“After 3 years, we’re nearing the appeal date at the Supreme Court,” Gary explained. “The case involves Gotopless activist Sonoko Tagami, who was in court in 2014 after going topless on Chicago's North Beach.”

On June 12, Flaxman said, “We’re still awaiting a ruling in the appeal as to whether Tagami’s protest for topless equality is protected by the [US] Constitution. We’re heartened that similar challenges are being made across the country.”

“One case is in an early stage, with topless activist, Anni Ma suing the city of Los Angeles,” she said.  “And on February 21 in Colorado, District Court Judge R. Brooke Jackson granted an injunction to halt a Fort Collins ordinance prohibiting women from showing breasts in public. He said the ordinance discriminated against women and perpetuated stereotypes sexualizing female breasts. That case involved topless activist Brit Hoagland.”

Gary said the third additional case is in Ocean City, Md., where the city council passed an emergency ordinance on June 10 to prevent women from going topless​.  In response, the office of the Attorney General of Maryland issued a letter of support referring to the United States VS Biocic that stated:  ​

"The important government interest is the widely recognized one of protecting the moral sensibilities of that substantial segment of society that still does not want to be exposed willy-nilly to public displays of various portions of their fellow citizens' anatomies that traditionally in this society have been regarded as erogenous zones. These still include (whether justifiably or not in the eyes of all) the female, but not the male, breast. "

“We’ll continue to denounce this discriminatory "moral sensibility​" both here in the US and internationally,"  Gary concluded.  "We won't stop until we achieve gender topless equality.​"