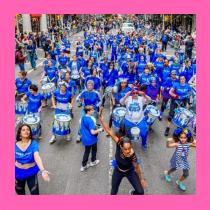 New York City, NY, Aug. 24 - While Gotopless event organizers are getting ready for their multiple marches scheduled next Saturday throughout North America and Europe, the organization’s NY City branch is finalizing the preparation of its parade that will, for the first time, include a topless marching band.

Since 2007, the organization has held annual GoTopless Day events on August 26 to honor Women's Equality Day, commemorating the passing of the 19th Amendment and inspired women worldwide to stand up for that right.

“Our goal is for equal gender topless rights to be enforced worldwide, freeing women's nipples,” said GoTopless Spokesperson, Kasyo Perrier, who leads GoTopless in NYC. "In New York, police will block off streets to let our GoTopless
Parade pass.”

She said that New York is the ideal location for the parade since it's already legal for women to go topless there.

This year, the GoTopless parade will include the Fogo Azul women’s marching band that will be performing topless.

“They will be the world's first ever topless marching band," remarked Perrier. "These musicians are braving deep social taboos with their presence and are sending a great message of empowerment to fellow women worldwide,” said
Perrier. “At last, free your breasts, free your mind!”

“Since 1992, New York has been one of the world’s few cities to legally recognize women’s topless rights,” Perrier said, adding that the past decade has helped to further that right elsewhere. Gotopless inspired the making of the movie ‘Free The Nipple’.  It prompted actresses and performers like Scout Willis, Rihanna, Miley Cyrus, Lady Gaga, Iggy Azalea, and recently Paris Jackson and Sasha Pieterse to bare their nipples publicly in support of this cause,” she explained.

Nadine Gary, leader of the Gotopless Movement, explained that several U.S. states and many countries around the world continue to ban equal topless rights because of archaic patriarchal values widely perpetrated by Abrahamic religions in Western democracies that make women feel shame and guilt about exposing their breasts and contaminate State laws on a global level.

“The GoTopless campaign runs much deeper than a little nipple show,” said Gary, who is also a Raelian Guide. “It rattles an obsolete social system that needs to be overcome for ‘the New Human Being’ to emerge and a peaceful world along with it.