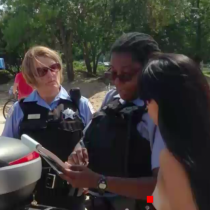 Chicago Nov. 13 - On Nov 8, 2017, in a 2 to 1 margin, a three Circuit Judge panel composed of Frank Easterbrook, Ilana Rovner and Diane Sykes ruled to dismiss the GoTopless law suit, Tagami v the City of Chicago.

In 2014, Sonoko Tagami was fined by the Chicago police for being topless on International GoTopless day on the beach where men can be seen topless without any concern from the police" declares Nadine Gary, president of GoTopless. "GoTopless will petition for rehearing within the next 14 days through our lawyer Joel Flaxman. Such unconstitutional and archaic ruling does not belong in our justice system."

Ever since its inception a decade ago, Gotopless has been claiming that women have the same constitutional right to go topless in public as men. If not, men should also be forced to hide their chests.  This claim originated from Spiritual leader Rael whose all-encompassing vision on gender equality begot the creation of GoTopless.

Gotopless’ claim was met with disagreement from Judges Easterbrook and Sykes who invoked "[the] general interest in preserving health, safety, and traditional moral norms and public order." to keep the discriminatory status quo in place.

"It is those same traditional moral norms that have kept women being sexually discriminated and harassed for centuries without them having the means to denounce it without repercussions" said Nadine Gary. "The traditional norms dis-empower women and condemn them to 'modesty' and silence. Gotopless is similar in essence to the #Metoo campaign. It is essential that our lives, including our clothing or lack of, are not dictated by traditions and religious beliefs but by the respect of the constitution that guarantees gender equality".

"Our position was supported by Judge Rovner who rebutted her colleagues conclusion with a series of powerful arguments convincing GoTopless that gender topless equality can no longer be ignored by the justice system.

Rovner refuted the idea that gender stereotypes are constitutional just because we've always had them. She wondered if:  " ...something passes constitutional muster because it has historically been a part of ‘our culture”.

Rovner further challenged the lawfulness of public sensibilities concerning gender-based classification and inquired “whether the particular ‘sensibility’ to be protected is, in fact, a reflection of archaic prejudice or a manifestation of a legitimate government objective”.

Rovner squarely addressed the consequences of “imposing a burden of public modesty on women alone”.  She warned of the “ramifications that likely extend beyond the public way”.  She adds that “evaluations based on stereotypes of how women should dress, appear, and comport themselves can constitute sex discrimination violating Title VII of the Civil Rights Act of 1964”.

She discredited her colleagues who presented the notion that the law condemning bare-chested women in public was part of a broad consensus.  Rovner indicated that "only three states (Indiana, Tennessee, and Utah) have statutes clearly treating the exposure of the female breast as indecency" and that " the Model Penal Code is limited to public exposure of the genitals (male or female)."

Rovner dissented from her 2 colleagues by concluding that Tagami has a potentially viable First Amendment and sex discrimination claims and should be permitted to develop the record in support of her claims”.