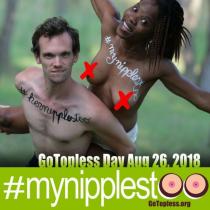 Las Vegas, NV, Aug 23 - The 11th annual GoTopless Day will take place in cities across the US, Canada and worldwide on August 26 in commemoration of Women Equality Day (the passing of the 19th amendment).

"As long as men are allowed to be topless in public, women should have the same constitutional right” stated Maitreya Rael, international spiritual leader of the Raelian Movement who inspired the creation of the women’s organization, GoTopless in 2007.

“This would seem a straightforward argument” noted Nadine Gary, president of GoTopless and Raelian Guide “but in high courts, topless activists are being confronted with judges’ claims that ‘morality’ and ‘people’s sensibilities’ supersede constitutional gender equality.”

“Our request for a hearing of the Gotopless court case Sonoko vs The City of Chicago was turned down by the U.S. Supreme Court a few months ago” Gary explained “so the fate of Topless Equality is currently left to each State though 33 of them are legally topless”.

“Morality, then, is the only ‘legal’ argument blocking  topless equality ” emphasizes Gary “and it is deeply rooted in the Judeo-Christian values of shame and guilt”.

“But what could be immoral about a human body part allegedly made in the image of "the creator(s)" as the Bible reminds Christians and Jews?” Gary pondered. "‘People’s morals’ and ‘sensibilities’ are highly subjective and not necessarily constitutional as most judges admit. Women's right to vote was once considered indecent and yet, when challenged by enough of them, the Constitution rightfully prevailed".

“Now, if courts decide that women’s topless rights are just too challenging for ‘people’s morals’ and ‘sensibilities’ in Western Democracies in the 21st century,  then there is only two viable options to preserve constitutional gender equality: “men should be forced to wear something to hide their chests,” as Rael declared a decade ago and/or "thousands of women should take on the streets topless” adds Gary.  Their peaceful nipples shall overcome the local forces who won't have enough time to fine or lock them all.”

The  goal of Gotopless is to inspire both actions in US streets and in all Western democracies, on August 26th because  equal means all or none !

Refer to the gotopless ‘boob map’ to locate a GoTopless event around the world on August 26th.