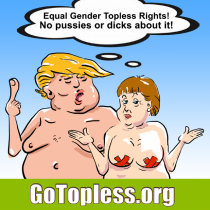 New York City, Aug 19 - The women's organization, GoTopless embraces the timely ‘gender equality’ agenda proposed by the G7 during their summit in Biarritz, France on Aug 25 as the 7 nations leaders announced their intention ‘to make equality between women and men a major global cause’.

GoTopless, inspired by world Spiritual leader and human rights activist, Rael, has been leading the fight for gender topless equality since 2007.

GoTopless Day demonstrations invariably fall on Aug 26, Women's Equality Day or on the Sunday closest to this date, like this year. And, as fate would have it,  GoTopless Day 2019 will take place during the French G7 summit.

On Aug 25, in NYC, Los Angeles and countless other cities and communities, women and men will stand up topless for equality, some with masks of Donald Trump and a vulva drawn below the belt to remind Americans of the true reason for topless gender inequality, ie, what’s between their legs. In the demonstrations, women will go topless with a picture of a penis in their front to denounce current topless gender discriminatory laws.

"Topless rights have been the exclusive privilege of men for over 80 years!  It is about time Western Heads of State denounce the fact that human rights are dictated strictly according to one’s vulva or penis”  states Nadine Gary, Raelian Guide and president of GoTopless.

GoTopless exposes nipple inequality and denounces the abysmal bodily repression still inflicted on women by Abrahamic religions in the 21st century and carried out by obsolete prudish laws even today.

“A law that unilaterally criminalizes women for going topless in public begets  ‘sexual violence against women’” says Gary, “and it is one of the causes the G7 intends to overcome”.

Gary adds: “It hypersexualizes women’s chest and creates a disrespectful reaction in many men, reinforcing a macho attitude among them”.

GoTopless members agree with G7 leaders that women must be educated.

"Women must be educated to embrace their bodies from the youngest age” says Gary,  “and our laws must validate this cultural shift by unequivocally adopting gender topless equality.  Already 35 US states are legally topless on paper but the law is not enforced.”  https://gotopless.org/topless-laws

"And, many women are concerned about going topless because of the fear of being harassed" Gary remarks  "Steep fines must be put into place to deter men from doing so"

"Eventually, both men and women will become accustomed to seeing female breasts in public.  Women will grow the confidence to exercise their topless rights and men will develop the respect to be comfortably in their presence." Reassures Gary

The G7 nation leaders have agreed to show concrete legal progress when they reconvene next year.

“The timing couldn't be more adequate” rejoices Gary  “Aug 26, 2020 will mark the 100th anniversary of Women's Equality Day which commemorates the passing of the 19th amendment. It will be the perfect date to enact topless equality at the Federal level in the USA.”