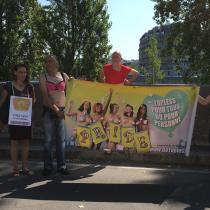 Gotopless took place on Paris Plage this year, just like last year where we were able to match for a whole 32 minutes before being stopped by the police. (we had lasted only 2 minutes the year before)

On this very hot sunny day, there was an obvious absence of equality between men and women on  Paris Plage. Countless men were topless and enjoying the bright sun while women had to dutifully wear their “mini burkini” to cover their chest.

We began our match, walking slowly on the beautiful path along the Seine as a group of 3 topless women and 2 topless men.

The reaction of the people who noticed us was mostly nonverbal.  We noticed astonishment, but also envy and even admiration toward us for daring to do what we were doing.

In the beginning, a group of women wearing  a two-piece swimsuit kindly warned us that the police was nearby, and that they might fine us. We appreciated this act of solidarity and understood they approved of our behavior.

We were able to quietly demonstrate for more than half an hour and enjoy this pleasant feeling of complete freedom while awakening the conscience of others by modeling  what all women who want to bare their tops should be able to do.

Maryline, Head of GoTopless in France said “being topless on the beach in Paris Plage should be considered normal! But there is a strong regression of topless activity for women on French beaches. So, going topless has become indecent again in certain places.  If you don’t exercise your right, you simply lose it! We have to win it back for equality’s sake!”.

At one point, we came across a conservative Jewish family and felt the weight of religious morality pointing to the root of body repression.  The 2 men wearing a kippah and the 2 women wearing long dresses reacted very strongly at the sight of our topless chests.

One woman quickly turned her back on us and the other put her hand in front of her husband's eyes to stop him from seeing this sinful situation, screaming that it was very embarrassing for both of them.

After 30 minutes, we were stopped by the police from the city of Paris. Things haven’t changed since last year though we enjoyed our freedom 30 minutes longer this time and the police agents were very courteous.   However, they ordered the topless women to cover up but not the topless men, making gender inequality strickingly obvious.

Had we refused, they would have called the Paris patrol to arrest us. We decided not to take it any further.

We went on to rejoin the other gotopless members who were standing at the entrance of Paris Plage, holding a banner and passing out leaflets . 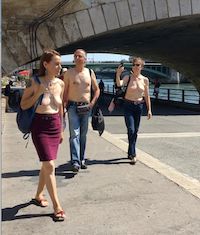 Aside from our street action, we also sent "Happy Gotopless" letters and cards to the mayor of Paris, Mrs. Hidalgo, her deputy, Marlene Schiappa, and all the female delegates in the Macron government.