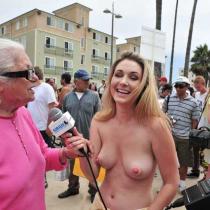 This past weekend, women took to Venice Beach to protest their right to to be topless in public. "As long as men can be topless, constitutionally women should have the same right, or men should also be forced to wear something hiding their chest," says Founder of GoTopless.org, Rael. In the state of New York, it is legal to go topless on those very same grounds.

"This is quite a contradiction to the gospel concert taking place just a few yards away," someone was overheard humorously saying. Other people were heard saying things like "get over the nipplephobia," "yeah, equal rights for everyone," and "this is the best day LA has ever seen." Well, maybe not the best day, but definitely the one of the more interesting ones. LAist Photographer Tom Andrews was out there to check it out -- here's some of what he saw.