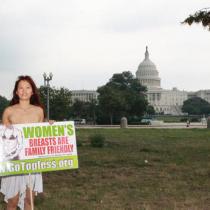 The annual proclamation of Women's Equality Day has also become National GoTopless. In 2012, GoTopless will fall precisely on Aug 26 2012. People around the country are encouraged to stand up and protest for the Constitutional equal right of women to go topless or to simply encourage women in topless states to exercise their topless right.

For the first time in American history, topless women will protest in front of the White Housel and stand up for their right to bare their chest in public.

If almost one hundred years ago that day, our constitution gave women the equal right to vote on the basis of equal rights, it must give women the right to be topless on the same gender equality basis.

On Aug 26, 2012, GoTopless will remit tens of thousands of signed petitions for women's constitutional right to go topless in public to the US Governement.
Gotopless will also send a special letter to President Obama addressing this women's right injustice because as all US presidents since 1971, he must formally acknowledge Women's Equality Day and the inequality struggles American women face at that moment.

BY THE PRESIDENT OF THE UNITED STATES OF AMERICA

The 19th Amendment to the United States Constitution tore down the last formal barrier to women's enfranchisement in our Nation and empowered America's women to have their voices heard in the halls of power. This Amendment became law only after decades of work by committed trailblazers who fought to extend the right to vote to women across America. For the women who fought for this right, voting was not the end of the journey for equality, but the beginning of a new era in the advancement of our Union. These brave and tenacious women challenged our Nation to live up to its founding principles, and their legacy inspires us to reach ever higher in our pursuit of liberty and equality for all.

Before the Amendment took effect, women had been serving our Nation in the public realm since its earliest days. Even before they gained the right to vote, America's women were leaders of movements, academics, and reformers, and had even served in the Congress. Legions of brave women wrote and lectured for change. They let their feet speak when their voices alone were not enough, protesting and marching for their fundamental right to vote in the face of heckling, jail, and abuse. Their efforts led to enormous progress millions upon millions of women have since used the power of the ballot to help shape our country.

Today, our Nation's daughters reap the benefits of these courageous pioneers while paving the way for generations of women to come. But work still remains. My Administration is committed to advancing equality for all of our people. This year, the Council of Women and Girls released "Women in America: Indicators of Social and Economic Well-Being," the most comprehensive report in 50 years on the status of women in our country, shedding light on issues women face in employment, crime, health, and family life. We are working to ensure that women-owned businesses can compete in the marketplace, that women are not discriminated against in healthcare, and that we redouble our efforts to bring an end to sexual assault on college campuses.

On the 91st anniversary of this landmark in civil rights, we continue to uphold the foundational American principles that we are all equal, and that each of us deserves a chance to pursue our dreams. We honor the heroes who have given of themselves to advance the causes of justice, opportunity, and prosperity. As we celebrate the legacy of those who made enormous strides in the last century and before, we renew our commitment to hold true to the dreams for which they fought, and we look forward to a bright future for our Nation's daughters.

IN WITNESS WHEREOF, I have hereunto set my hand this twenty fifth day of August, in the year of our Lord two thousand eleven, and of the Independence of the United States of America the two hundred and thirty-sixth.