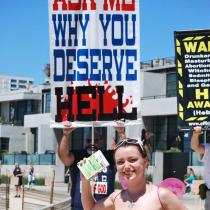 Back
Tweet
Some people have been writing to GoTopless concerned that our Organization's constitutional claim is blasphemy because the female body was not meant to be exposed in public according to god's law.

It is important to be clear about the term "god" when addressing this concern.

The word "god" is found in the original Hebrew bible under the word "Elohim", a plural which literally means "those who came from the sky". Indeed, the Raelian Philosophy explains that a very advanced human civilization, called Elohim, came from another planet a long time ago and created all life on Earth thanks to DNA and genetic engineering.

The Elohim were mistaken for gods.

Raelianism explains that the Elohim did create humans "in their image, after their likeness", including, of course, women's breasts!

The human body (and brain) is their masterpiece and we should not be ashamed of any part of it, on the opposite! (for more info, please visit rael.org)

This said, GoTopless includes thousands of women and men who have a variety of beliefs and affiliations, united by their common wish to see women's constitutional topless rights prevail regardless of their individual spirituality.