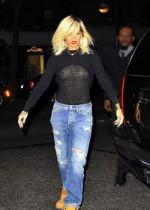 Facebook has informed Nadine Gary, president of the organization GoTopless (gotopless.org), that it is temporarily freezing her Facebook account because she posted a photo of Rihanna in which the celebrity appeared without wearing a top in NYC.

Gary said a Facebook representative told her that the picture, which Gary had posted on Facebook on behalf of GoTopLess, violated the social media site’s rules of decency.
“GoTopless is an activist women’s organization devoted to promoting women’s constitutional right to go topless in public,” Gary said in a statement released this morning. “The U.S. Constitution clearly upholds gender equality, and that principle should apply to laws dealing with the right to go topless as well as to the right to vote, bear arms and do many other things.”
Gary said Rihanna was seen exercising that right in New York City back in March, when she was seen going topless to a casual evening dinner.

“She was well within her legal rights, too, since New York State has allowed both men and women to go topless in public since 1992,” Gary said. “I posted the picture of Rihanna casually emerging from her limousine on a New York street to encourage other women to exercise that right wherever it’s currently legal, and to encourage other women to demand that any local or state law denying that right be changed in accordance with the gender equality guaranteed by the U.S. Constitution.”
Gary said that for Rael, spiritual leader of the International Raelian Movement and founder of GoTopless.org, the equation is simple:
“As long as men can go topless, either women should have the same constitutional right or men should also be forced to wear something that hides their chests.”
Gary said GoTopless wants to put a legal end to “the double standard on topless rights that is rampant not only on Facebook but everywhere else in the United States.”
She said her organization is organizing topless rallies across the country for Aug. 26 to honor Women’s Equality Day, which is celebrated on that date.
“Ninety-one years ago, women demanded that the U.S. Constitution give them the right to vote on the basis of gender equality, and GoTopless will use that same argument to obtain women’s topless rights,” said Lara Terenjak, spokesperson for GoTopless.

According to Lara Terstenjak, Raelian leader in the US, male participants will wear bikini tops during the Aug. 26 rallies to cover their chests.
“We want all current laws to reflect the gender equality rights guaranteed by the U.S Constitution,” she said. “If Facebook and other media outlets were going strictly by that principle, they would be censoring not only photos of topless women, but all the photos in which men appear topless as well!”