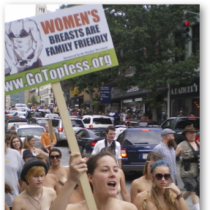 Back
Tweet
ASHEVILLE, N.C., July 31 – With local conservatives attempting to block an upcoming August 26 demonstration by women’s rights organization GoTopless in Asheville, N.C., GoTopless today released a statement declaring its resolve to continue fighting for gender equality under the Constitution, including the right to freely and legally go publicly topless as men do.

“We plan to hold our scheduled event in Asheville,” said GoTopless President and Spokesperson Nadine Gary. “It’s especially important that our message be heard there because some local politicians are making false accusations against our organization for their own purposes.”

She said Asheville conservatives, led by Carl Mumpower and Chad Nesbitt, recently sent a draft resolution to city officials in hopes of thwarting the August 26 event.

“Their resolution stated that last year’s GoTopless rally included, among other things, activities involving sexual performances, fondling of breasts, direct participation by underage minors, and exposure of minors to sexual acts. “These are absurd accusations and they are completely false.”

Mumpower is using the accusations as a political springboard, according to Gary.

“To further his political ambitions, he’s taking our event grossly out of context,” she said. “Our upcoming demonstration is just that, a demonstration, and further, it’s a demonstration of something that is perfectly legal in Asheville. In fact, the right to go topless should be acknowledged as a woman’s constitutional rights across the United States.”

She said walking topless in the streets of Asheville has nothing to do with sexuality.

“It is Mr. Mumpower and the other opposing conservatives who are trying to turn our event into something blatantly sexual when it’s not,” Gary said. “This is exactly the point we’re trying to make by having the demonstration. Women are currently forced to hide their breasts because men like Mr. Mumpower can’t look at them without thinking of something sexual. Well, we’re sorry, Mr. Mumpower, but we won’t hide our breasts because of your sexual hang ups.”

GoTopless is an offshoot of the International Raelian Movement (rael.org), a worldwide champion of human rights.

“Our aim is to highlight women’s constitutional rights, since men already have the right to go shirtless in public,” Gary said. The entire point of our demonstrations is to emphasize the principle of gender equality. If women have to wear a top, so should men. The Constitution says nothing whatsoever about gender distinctions for clothing.”

Gary said many people across the country already support the GoTopless cause.

“Centuries of patriarchal, top-down religious education have trained women to be subservient to men, to be only child bearers and homemakers and to remain chaste,” Gary said. “We must remember that it was less than 100 years ago that women finally won the right to vote in this country. Today, their emancipation is expanding to all aspects of life. Those who don’t want these rights for themselves can always turn them down. They can decide not vote, or decide not to do some of the jobs men do, and they can decide not to go topless. But neither they nor anyone else should try to impose these personal decisions on other women. That’s simply unconstitutional.”