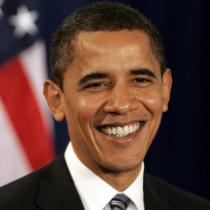 My name is Lara Terstenjak and I am the director of GoTopless, a women’s rights organization that claims women’s constitutional right to go topless in public on the basis of gender equality.  You once taught Constitutional Law at the University of Chicago, so you, of all people, are most aware that our claim is legitimate and that women in America are currently denied their constitutional rights under double-standard laws that force them to cover their chests in public while men don’t have to do this.

Therefore, unless these laws are changed, the only constitutional way to resolve this issue is to apply the solution offered by Rael, founder of GoTopless, fervent human rights activist and spiritual leader of the International Raelian Movement (rael.org). His position is simple: “Men must be forced to hide their chests if women are forced to hide theirs.”A few years ago, while you were vacationing in Hawaii, a topless picture of you appeared in the media. Mr. President, how would you like being legally forced to hide your chest on a nice, warm beach day? According to the Constitution, this is what will need to happen if U.S. laws refuse to acknowledge a woman’s right to freely go topless in public. Gender equality means “all or none.”One of the major arguments against women going topless is that the sight of a woman’s bare breast causes children psychological trauma, or even endangers them (the latter accusation was actually made in the official statement of a New York City police officer who wrongfully arrested Moira Johnston who was walking legally topless in public on May 28, 2012). That is complete nonsense. The fact that millions of European children routinely see topless women on European beaches and experience no ill effects from it proves that the female toplessness in public is completely harmless for children unless they are first made to feel that there is something inherently bad about it. It is only when parents are culturally conditioned to be upset by the sight of a woman’s breast that children can be traumatized, for such parents convey fear, shame and other negative emotions.

GoTopless is very respectful of other people’s personal preferences. If a woman decides she is more comfortable wearing a top instead of going without one, we respect that choice. But this should be a woman’s choice, not a legal requirement imposed in the name of someone else’s morality.Puritanical morality has hijacked our legal system by ignoring our constitution. Therefore, it is your duty under oath, Mr. President, to “preserve, protect and defend” women’s constitutional rights, even if they challenge the greatest American taboo – nudity – and even if they challenge your own moral upbringing.My naked chest has the same constitutional right as yours, Mr. President; it’s no more damaging or threatening or traumatizing to others than yours is! Americans need to learn the difference between nudity and sexuality, but the current repressive, unconstitutional laws in this country are counterproductive. They lead to deviant behaviors and pathology, for what is hidden and forbidden often becomes an obsession – sometimes a very dangerous one.

President Obama, this August 26, you will be honoring Women’s Equality Day, which commemorates the 92nd anniversary of the passing of the 19th Amendment. Our organization selected August 26 as GoTopless Day to honor and coincide with this same special date. For Women’s Equality Day, you will be signing a letter praising and encouraging women for their efforts to obtain equal rights, equal pay, equal job opportunities, etc.But one more area of women’s rights urgently needs to be addressed. This year, the hundreds of thousands of people who support topless rights ask that you act promptly and officially recognize our struggle to establish women’s topless rights legally, in accordance with the Constitution. We will soon present a petition to your government to voice this demand, which can no longer be ignored. Mr. President, if you give us legislative support, we are confident that legally topless women will proudly celebrate the hundredth anniversary of Women’s Equality Day on August 26, 2020. Thank you so much in advance for your prompt attention to this matter that has been so long unjust and neglected!