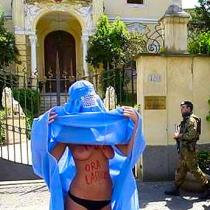 Gotopless is getting ready for its fifth “topless” demonstration in the streets of New York, Los Angeles, Amsterdam, and many other cities around the world.

In Paris, it will be its second attempt… “Attempt” is the proper term because last year, the few women who wanted to celebrate “GoTopless” Day by walking topless in the streets of Paris ended up at the police station before being able to remove the slightest piece of clothing.

How is it possible for six women to be arrested at the exit of a subway station simply because they intended to go topless, like all the other men who were accompanying them?

Guilty of their intention, guilty of daring to be equal to men insofar as their freedom to expose their bodies, guilty of claiming a right that was acquired on August 26th 1789 – as the Declaration of Human Rights was being adopted – guilty of denouncing a blatant discrimination when it comes to certain men having far more voluminous breasts than some women – and it does not require anyone to be overly observant to notice this.

Some will argue that it is because men have a penis… So, does it mean that in order for women to expose their breasts in Paris today, they must have a very big clitoris between their legs?

The debate is clearly childish, no doubt. In 1900, bathing suits covered most of the women’s bodies and it was only in the 1910's that a few women dared to expose their knees.

Then, in 1946, a French engineer invented the bikini, and this created quite a stir on beaches a year later… Women in France went on to progressively expose their breasts on these same beaches, which led to the admiration of feminists overseas who were themselves dealing with an uncompromising Puritanism on their beaches.

What happened to these French progressive women of the 70's and 80's? Today, it is possible for women to walk topless in the streets of New York; Indeed, in 1992, women took the battle to the NY State Supreme Court to claim their right to be topless the same way men are, and they won.

Between Paris and New York, which city is now the most puritanical?

It goes without saying that behind these laws prohibiting women from showing their breasts lies an evident accumulation of religious taboos.

According to religious authorities, exposing a breast is considered a sexual act that can lead to a possible trauma in children who witness such lewdness. Knowing that many children are exposed to this indecency during the first months and years of their lives, it is difficult to imagine where this trauma could arise from, if not from the fear inflicted by these very religious authorities.

In the beginning of the past century, to expose an ankle was considered a sexually charged act. Eventually, these exposed ankles lost their “sex appeal,” and this means it is likely that breasts will go through the same process once they are no longer confined.

If women’s breasts are not admitted on the public stage to the same extent that men’s breasts are then it is time to impose the burqa for all. This way, in the absence of freedom, at least gender equality will prevail and be respected.

The Gotopless march, scheduled to take place in Paris on August 26th 2012 – anniversary of the Declaration of Human Rights– is an important step toward true and genuine gender equality.

If men have the right to expose their bare chest in public there is no logical reason why women should be denied this right.

The Declaration of Human Rights was inspired by the Natural Law, which protects all human beings from any religious influence. The majority of people in France are atheists, and yet religious rites and taboos still dictate how people should dress and still determine French holidays… If you are fed up with such hypocrisy, do join us in Paris at Fontaine St- Michel on August 26th, at 1:30pm.

And even if you do not wish to go topless on that day, which is your most sacred right, come support those who will be there, breasts exposed, marching to claim their constitutional right to be “equal to men in all aspects.”