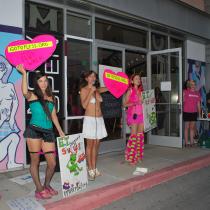 Back
Tweet
Members and affiliates of GoTopless have been supporting the Slutwalk Movement since its inception and attended Slutwalk LV on Sept.1, 2012.

GoTopless women stand for topless gender equality, and they too are sometimes called "sluts." They face strong moral opposition from those who believe the very sight of women's breasts will trigger sexual excitement in others.

So what? Every part of the human body can be arousing! Should burqas be imposed on everyone, then?

GoTopless emphatically remind people that the sight of a woman's nude chest in public is not an invitation for rape. The legal system must protect women from the unbalanced individuals who could violate their topless freedom. These troubled people are often severely repressed.Nevertheless, our legal system is there to prosecute such offenders, not to deny women their freedom for the sake of their safety!

"Once in cabinet we had to deal with the fact that there had been an outbreak of assaults on women at night. One minister ...suggested a curfew; women should stay home after dark. Golda Meir replied, "But it's the men who are attacking the women. If there's to be a curfew, let the men stay at home, not the women..."