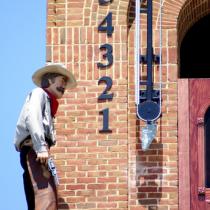 Back
Tweet
On Gotopless Day, August 26, 2012, The Convention and Visitor's Bureau of Grapevine, Texas turned down the work of local Grapevine Sculptor Art Wells because his nude female busts were deemed not 'Family Friendly' while the same bureau did not think twice about inaugurating a clock tower with 9-foot tall animated gun fighters just a few months earlier.

In this day and age, buzz words like 'family-friendly' equate more closely to 'let the religious and do-gooders choose rules for society.'

And sometimes the hypocrisy of it gets a little sickening.

For example, marble sculptor Art Wells, has been repeatedly told to 'family-friendize' his marble busts because they reveal bosoms.
Are they implying that bosoms are anti-family?

The Grapevine Convention and Visitor's Bureau seems to think so. During the selection of art pieces for a public show, Grapevine had the sole discretion on what they deemed acceptable or non acceptable. (see the exchange of letters between the Bureau and sculptor Art Wells below)

So instead of selecting the refined artwork of a skilled sculptor, guess what they choose for the public? To build a $100,000 clock tower with 9 foot animated gunfighters! YOOHOO!
Why? Because Grapeville, TX declared it was FAMILY FRIENDLY!

This link shows the video of a child witnessing the animated gun fight. Note the reaction of the litlle girl when she is asked which part of the gun fight reinactement she preferred.

So the moral of this story is be sure to bring your kids to Grapevine Visitor's Bureau to see the timely giant cowboy show promoting violence offered twice daily! And don't worry, your children will not be "endangered" by the sight of any women's bosom in their art museum. They got you (and them) covered.

For a complete and healthy appreciation of Art Wells sculptures, please visit his website: [link]

Grapevine asked that it be " family friendly". Your nudes are very realistic! The one you had in the last show was gorgeous, and not as " nude" as some of your others. Do you have any that aren't ?
Shelley


Why don't you send a photo of what you were thinking of entering and we can run it past the folks at Grapevine before you send in your show fee? That way, we can tell you if it's a problem or not. I loved your piece at the ALoft, and would hate to miss out on having you in our show.
Shelley

Hi Shelley,
I was wondering, what was not family friendly with my portraits? I've included a pic of another marble portrait, too late for this show, but for future reference, would this one be family friendly?
Thanks,
Art Wells, sculptor