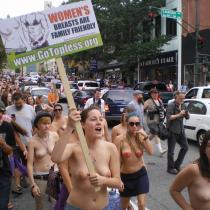 Back
Tweet
ASHEVILLE, Feb. 6 - After North Carolina State Rep. Tim Moffitt proposed a bill that would make it illegal for women to go topless in public, GoTopless (www.gotopless.org), an organization devoted to achieving that right, vowed to oppose such legislation every step of the way.

“Though we’ve explained our viewpoint many times during GoTopless rallies over the last two years, politicians are still missing the entire point,” said GoTopless President Nadine Gary in a statement released today. “Our rallies are aimed at bringing attention to a serious matter of unconstitutional, unequal treatment: In much of the United States, women are still persecuted or arrested for going topless, while men aren’t.
If Moffitt’s bill becomes law, that law will clearly be unconstitutional, since men will enjoy a privilege denied to women.”

Gary added that although the U.S. Constitution and many state constitutions emphasize equality under the law, the issue of equal topless rights has been unjustly ignored.

“To uphold the U.S. Constitution, Representative Moffitt should honor its references to equality,” Gary said. “Instead, he’s attempting to widen the inequality gap when he should either be protecting women’s rights to go topless in his state or striving to see that men’s nipples remain equally private.”

Ironically, GoTopless rallies themselves are responsible for the proposed bill, according to Gary.

“Moffitt’s bill stems from the topless rallies our organization held in Asheville, North Carolina, in 2011 and 2012,” Gary explained. “But even if it passes, our rallies will continue, with the insistence that men also be jailed for nipple exposure. All we’re insisting upon is equality: either equal rights to go topless or equal punishment for violating a law that’s applied equally to both genders.”

Topless rights are one of the few areas of gender equality that haven’t been addressed at a federal level, and GoTopless is determined to see that it is.

“In a country that now accepts women as frontline soldiers and encourages gay men and women to openly serve in the military, GoTopless members are confident that Representative Moffitt is choosing a battle he can’t win,” she said. “When this case reaches the courts, they’ll have no choice but to see this as a constitutional issue based on gender equality, which is the exact point we’re making.”