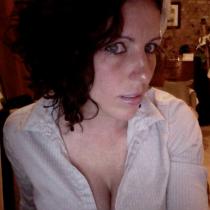 “Phoenix refused to pay fines for going topless and then launched a hunger strike while incarcerated to protest New Jersey’s gender-discriminatory topless laws,” a spokesperson for GoTopless said this morning. “She stood up for her constitutional rights and wouldn’t back down. And after a long, nine-day ordeal, she won!”

GoTopless also released the following statement made by Feeley after her release:

“I didn't shed a single tear in their cage and they couldn't break me. Not even the guard’s violent threats could stop me, and that’s because of everyone who loves and believes in me. I spent nine days naked and on a hunger strike while confined to a filthy cell in lockdown. There was 24-hour video surveillance. I wasn’t allowed visitors, mail, phone calls, or anything other than a couple of blankets and a tiny window to the outside world. The warden let me out early, and I’m happy it’s over.”

Feeley added that she is thankful for “the enormous show of support and expressions of love” she received from GoTopless members and others sympathetic to her cause through her 9 days of standing up for women's equal topless rights.

“I wouldn’t have been able to live through it without their love,” she said. “To the anonymous donor who offered to pay my fines, to the strangers who sent me mail, to my friends who sent their support, and to the protestors who set off fireworks in front of the jail Saturday, which was my only entertainment while I was in there, thank you!”

Feeley will be honored as guest speaker for the GoTopless Day event in New York City on August 25. The date for the event was chosen to honor Women’s Equality Day.