In a recent public statement, you used the representation of bare breasted Marianne as the symbol of women’s freedom.

As a representative of the international organisation GoTopless, I would like to thank you for highlighting this vital link to the empowerment of women.
GoTopless, an independent non-profit organization based in the United States, was founded in 2007 following the suggestion of spiritual leader Raël, with the
goal of promoting gender equality, based on a simple premise: "where men have the right to be topless, women should also have the same
right."*

The female breast is incorrectly considered to be a sexual organ. Thus, the cost of freedom for every "French Marianne", that is to say any women choosing to be topless just
like men, is a 15,000 euro fine and a year in prison for sexual exhibitionism ( Art. 222-32 of the criminal code). That is the price of freedom in France today!

Under a government purporting equality, how come men’s breasts escape this distinction? In what way are they different from women’s breasts? Don’t forget that a century ago, when a woman showed a bit of leg above the ankles, she was arrested for indecent exposure. Today, only men can strip off their tops in certain public places such as swimming pools. Why should women be forced to wear a top, while men have a choice? This is blatant double standards ... Where is the equality? 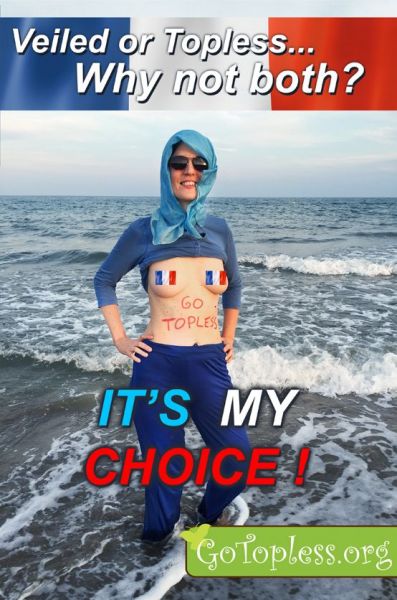 It would be great credit to you if you were the one to give “Liberty, Equality, Fraternity” the full meaning, with the legal implementation of the right for everyone to be topless. For our organization, freeing our breasts, freeing our body, is to free our minds. Not just for women. Men would also be released from their obsession of women breasts if breasts were not considered a shameful part of the body that should be hidden. Whatever is repressed will maintain obsession.

(*) Topless events organized on the occasion of the International GoTopless Day bring together thousands of people each year, on the Sunday closest to August 26, historical date marked by the Declaration of Human and Citizen Rights affirming equal rights - principle with constitutional status - as the principle of equality between men and women in all fields, which appears in the preamble of the 1946 Constitution.

This news item is from GoTopless
( http://es.gotopless.org/news.php?extend.158 )