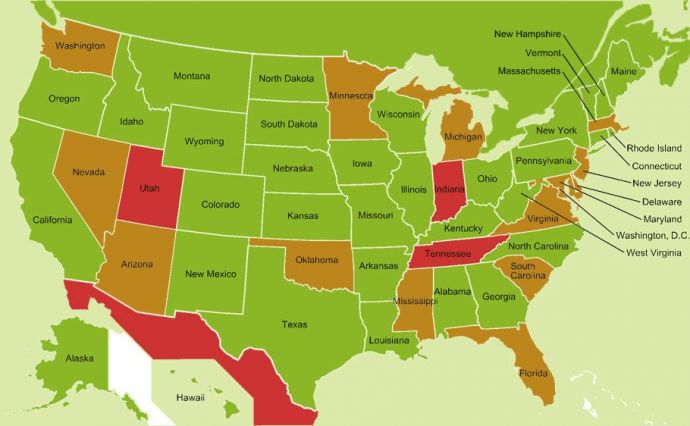 The green colored states are those where top freedom is in effect.
The orange colored ones have amibiguous state laws on the matter.
The red colored ones are the ones where the mere showing of the female breast in public is illegal according to state law.

In the USA, though the majority of states are top-free, some cities in those states have passed (unconstitutional) ordinances that annul the state's top free statute.

In Canada, the law on public decency is found in Sections 173 and 174 of the Criminal Code. However, what constitutes an indecent act is not defined, and is open to interpretation by the courts. Topfreedom is allowed in Ontario, Sasketchawen and British Columbia following specific court cases on the matter but the case for topless equality has not been heard by the Canadian Supreme Court yet.

It is also legal to be topless in public in the following countries:

How can I find out if my city is topless?
Simply google the city name and its municipal code and key in the word "nudity". Do the same for the county where the city is located to be sure. Consult with an attorney.

Can I be arrested for going topless in a topless city?
Even if a top free law is firmly in effect, the police can still arrest you under the pretense of "disorderly conduct". Don't be intimidated! You can sue the city back for wrongful arrest (if your only crime was to go topless). That is what Phoenix Feeley did in NYC in 2005 (you can read her story in our news section)