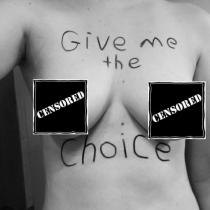 Emmie Tyson is a Washington State topless activist in her twenties. She shares this story about her life-long activism starting when she was 7. Recently, on July 9, a father called the police on her for swimming topless in a river because he wanted to protect his children playing on the river bank.

I identify as gender-fluid, but embrace my female body. My physical body doesn’t define my gender.

All my life I have felt somewhat disappointed by what I could and could not do as a woman. When I was a kid I dreamed of being a Boy Scout. All my friends were Boy Scouts and I wanted to join them on their adventures. Unfortunately, I could not join them. I was confused. Why couldn’t I join my friends? Why was I being excluded because of something I was born with and could not change? Eventually I accepted it and moved on.

One day, my father took me to the YMCA pool. I was about 7 years old and I loved swimming. The pool wasn’t in our town, so I didn’t get to go too often. When I got into the changing room I realized I forgot my swimsuit top back at the house. There was no time to drive back and grab it because open swim was coming to a close. My dad and I politely asked the lifeguard if I could wear some of my street clothes into the pool. He explained how only swimwear was allowed. We then asked if I could just go shirtless. I had no breasts, and if my hair was shorter I could have been easily mistaken for a little boy. He objected and said that it would not be appropriate. I went home without going swimming that day.

I asked my mom and dad numerous times why I couldn’t go swimming without a top when the boys could. Nothing they said made any sense, and it still doesn’t.

Last year I started getting interested in being involved in the topless rights movement. Being gender-fluid; some days I just don’t feel like a woman, but I embrace my body. I am treated with more respect and equality on my more masculine days. Being topless doesn’t feel wrong at all. It feels natural. All the boys were doing it, why can’t I? I can’t change the body I was born with, besides, women are beautiful.

Then, on July 9, 2015 in Snohomish WA, at 9:45 pm, I almost got charged with a crime for going topless. It was dusk when my friends and I decided to go swimming. Out of respect I asked the people around me if they minded me going topless, and nobody minded except one man. He said that he didn’t want his children "exposed to it". I walked down the river until I was out of sight of his children. I took my shirt off once I was fully submerged in the water. I had my back facing the side of the river he was on the whole time. I made sure not to let his children see, and they paid no attention to me. Once it was dark and they were leaving, I swam closer to their side of the river. About five minutes later there was a police officer on shore shining a light in my face. He asked me to come to shore and put a shirt on. He explained to me that the man contacted the police. The man claimed he “saw everything” and wanted to protect his children. The whole evening I was at least 100 yards away, underwater, with my back turned towards them, and it was almost completely dark out.

Although I had witnesses, the man almost pressed charges on me. I just wanted to feel like an equal. I wasn’t attacking his family, I was just enjoying the same rights that men have. It felt terrible knowing that I could be arrested for something on my body that I did not choose to have. I could be arrested for having something that 51% of our population has. Men have nipples, and some even have breasts! Men don’t ever have to worry about being put in jail for showing their chest off. They don’t have to worry about being constantly sexualized by the media.

I just want to be equal.

Emmie is organizing a GoTopless Day event in Snohomish on Aug 23rd.